Responses of “Ordinary People” to Persecution 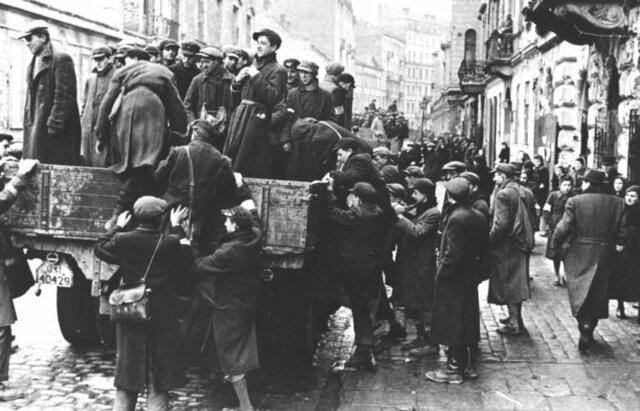 The Institute for the History of the German Jews in Hamburg, the Wiener Holocaust Library London and the Stanley Burton Centre for Holocaust and Genocide Studies at the University of Leicester are pleased to co-host a virtual panel discussion for Holocaust Memorial Day 2023. The event is organised in response to the 2023 HMD theme of ‘ordinary people’, which acknowledges that genocide is both facilitated and experienced by ordinary people.

This panel of speakers highlights new thinking and research about this theme, considering how Jewish persecutees responded to the Nazi onslaught in the Warsaw ghetto and about the various forms of protest and solidarity by “ordinary” Jews from Poland for Jews from Germany.

Dr Katarzyna Person, author of Warsaw Ghetto Police: The Jewish Order Service during the Nazi Occupation, among many other studies, is a historian working at the Jewish Historical Institute in Warsaw. After her PhD, awarded by the University of London in 2010, she held postdoctoral fellowships from the International Institute for Holocaust Research in Yad Vashem, the Center for Jewish History in New York City and La Fondation pour la Mémoire de la Shoah. She has written a number of articles on the Holocaust and its aftermath in occupied Europe, and edited three volumes of documents from the Underground Archive of the Warsaw Ghetto. A book, based on her PhD thesis, which deals with assimilated, acculturated and baptised Jews in the Warsaw Ghetto, was published by Syracuse University Press in 2014.

Dr Anne-Christin Klotz, author of Together against Germany: Warsaw’s Yiddish Daily Press and Its Fight against National Socialism, 1930–1941 (in German), is a postdoctoral researcher at the Martin Buber Society of Fellows at the Hebrew University of Jerusalem. After she received her PhD from the Free University Berlin in 2021, she was a postdoctoral fellow at the University of California, Berkeley. Before and during her studies she worked as a research assistant at the Selma Stern Center for Jewish Studies Berlin-Brandenburg and volunteered at the educational department at the Holocaust memorial site Stutthof (Sztutowo, Poland). In addition to scholarships by Yad Vashem and the Saul Kagan Fellowship in Advanced Holocaust Studies, she was recently awarded the “Irma Rosenberg Award for the Research of National socialism” by the Austrian Society for Modern History for her PhD thesis as well as a special distinction by the jury of the Scientific Research Award of the Polish Ambassador to Germany. Currently, she is preparing a source edition on Yiddish travelogues through Nazi Germany and started working on a new book project that examines the role, function and networks of Eastern European Jewish landsmanshaftn (hometown associations) as a means of migrant self-help during and after the Shoah.