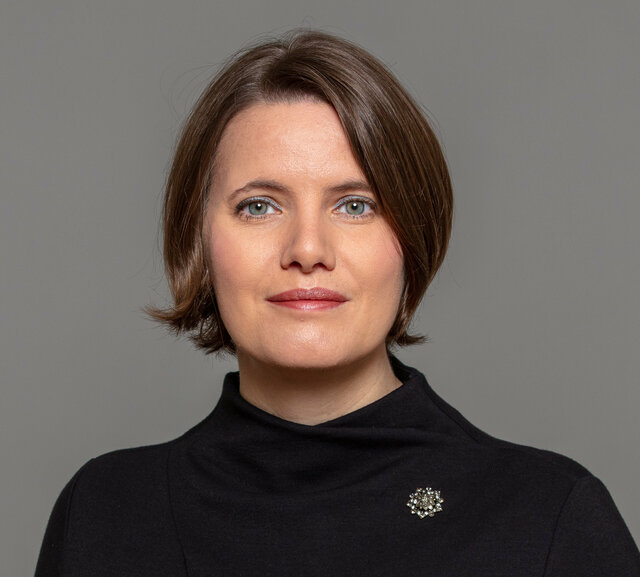 Kim Wünschmann has been Director of the Institute for the History of the German Jews since October 2021. She studied Jewish Studies, political science, and psychology at the Free University of Berlin and The Hebrew University of Jerusalem. She received her doctorate with a historical study at Birkbeck College, University of London, which was awarded the Yad Vashem International Book Prize for Holocaust Research, the Prix “Fondation Auschwitz – Jacques Rozenberg,” and the Herbert Steiner Prize of the Documentation Center of Austrian Resistance (DÖW) and the International Conference of Labor and Social History (ITH).

From 2010 to 2015, she researched and taught at The Hebrew University of Jerusalem, first as a research fellow at the Franz Rosenzweig Minerva Center for German-Jewish Literature and Culture, then as a German Ministry of Education and Research (BMBF) Research Fellow of the Martin Buber Society of Fellows in the Humanities and Social Sciences. This was followed by positions as DAAD Lecturer in Modern and Contemporary European History at the Weidenfeld Institute – Centre for German-Jewish Studies at the University of Sussex and, most recently, as a research fellow at the Department of Contemporary History at the Ludwig-Maximilians-Universität Munich (LMU) and as coordinator of the LMU’s collaboration with the Center for Holocaust Studies at the Leibniz Institute for Contemporary History Munich-Berlin.

Kim Wünschmann’s research focuses on German-Jewish history of the twentieth century, contemporary history with an emphasis on the history and impact of National Socialism and the Shoah, the history of law and diplomacy, as well as comics studies. In her study on the treatment of so-called enemy foreign nationals (“enemy aliens”) in the wars of the modern era, she probes the complexity of the phenomenon as a legal subject. She asks how norms developed in international law related to a practice of restrictive measures that was often experienced as injustice by those affected.

As part of a collaborative project funded by the Volkswagen Foundation, she has been investigating the connections between antisemitic persecution perpetrated and experienced in rural areas and German-Jewish re-encounters after the Shoah in a methodologically reflective Graphic History. She is also a member of the “Gewalt-Zeiten” research group at the University of Hamburg.

Serving as Director of the IGdJ, Kim Wünschmann has an impact on the general public. Through her involvement in committees as well as in publications and events, she is concerned with imparting knowledge about Jewish life and culture and thus emphasizing the relevance of history for the present and the future. Moreover, she regards university teaching and the promotion of young scholars as an important part of her work. In this connection, she is also interested in international exchange at all qualification levels, especially with Israel, which results in sustainable projects, such as the website “Public History in the International Virtual Classroom”.

“Enemy Aliens”: The Status and Treatment of Foreign Civilians in Modern War

Graphic History: Oberbrechen. A German Village Confronts its Nazi Past

Before the Porgom: Anticipated Violence in Modern Jewish History